The Exhibition “In Search of Paradise Lost…” 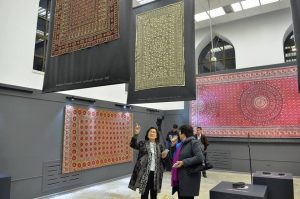 The Islam Karimov Foundation is presenting a new exhibition entitled “In Search of Paradise Lost…” dedicated to the revival and artistic development of the vanishing traditions of Uzbek block printing on fabric.

The exhibition is taking place from 30 November to 20 December 2017 in the Tashkent House of Photography. The exhibition’s opening ceremony was attended by the head of UNESCO in Uzbekistan, representatives of the diplomatic corps, and distinguished art historians and artists.

The exhibition features classical and modern examples of Uzbek block printing as well as an extensive collection of wooden stamps (qolib). After gaining widespread popularity in the first half of the 19th century, this national applied art basically disappeared by the middle of the 20th century, although it enjoyed a brief revival in the late 1970s and early 1980s. Today the craft of block printing by hand has survived only on a small scale in Bukhara and Marghilan. 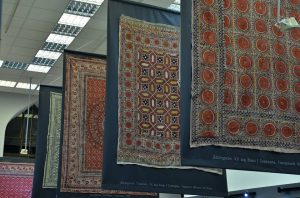 At the end of the 19th century and beginning of the 20th century there existed well-established block printing centers in Tashkent, Bukhara, Khiva, Marghilan and Namangan.

Block printing was in high demand among the population at large due to its beauty, practicality and affordable price. Master artisans (chitgar) were able to achieve magnificent results despite the complicated, labor-intensive process involved in dyeing and producing printed fabrics. They were responsible for extraordinary advances in traditional Uzbek block printing: the enchantingly beautiful patterns of the material, its eco-friendliness and its popularity among consumers made this handicraft one of the most beloved in the country. 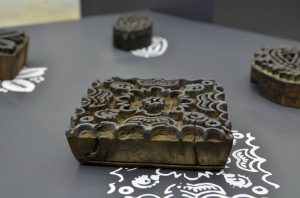 Block print production (chitgarlik) is one of the oldest types of decorative and applied arts, whereby textiles are embellished with patterns and shapes by means of a special wooden stamp.

Programs conducted under the patronage of the foundation aim to advance Uzbekistan’s historical, cultural and literary heritage, and include concerts, exhibitions and shows. The foundation facilitates cultural, academic and educational exchanges between accomplished artists and the academic community both within the Republic of Uzbekistan and abroad.