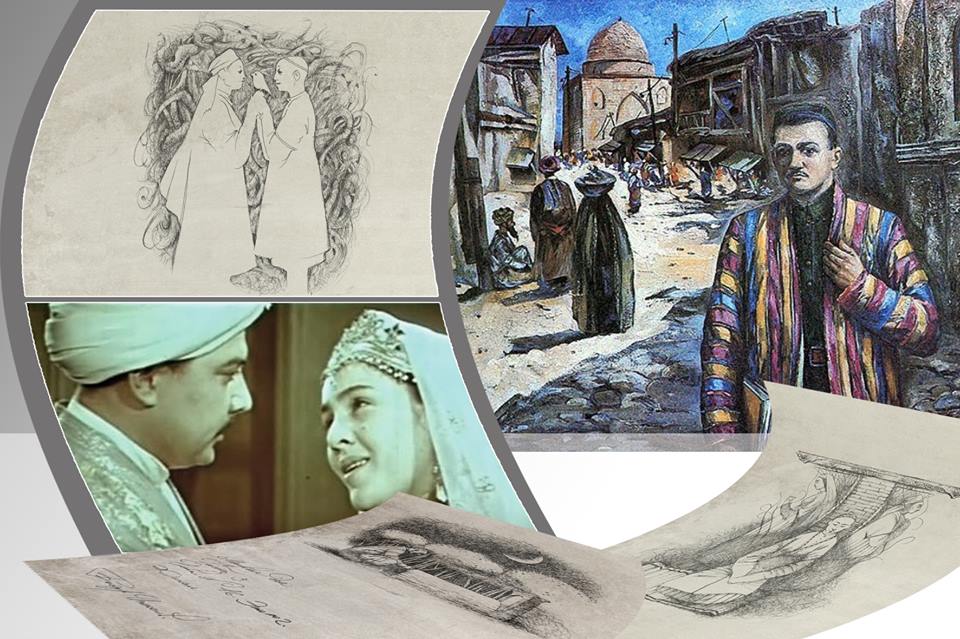 In the far reaches of the courtyard we see a snug room, marked by the elegance of its décor. If simple koshma felt rugs cover the floors in other rooms, here we find rich crimson carpets; if coarse blankets festoon the other quarters, here they are replaced by kurpach (Kurpach – a traditional quilted mattress stuffed with felt or soft cotton generally covered in silk or cotton, used not only on beds but also in seating areas. (Translator’s note.) ) covers made of silks and adrases (Adras — striped or monotone semi-silk fabrics with colourful designs. (Translator’s note.)) ; if oil lamps smoke in other rooms, here candle flames flicker in a lively dance. And the resident of this room behaves differently, too, not like the hot-headed, happy-go-lucky lodgers in other quarters.
Calm and reserved, of stately build, with a handsome, alabaster face, ebony eyes under equally ebony brows, and a light fuzz of moustache just showing through – such was our young man. In short, both room and resident distinguished themselves from the caravanserai’s other quarters and lodgers. The young man, presently engrossed in thoughts privy to none but himself, went by the name of Atabek. He was the son of an eminent nobleman from Tashkent, Yusufbek-hadji.
Two men entered the courtyard.
“Is this where Atabek is staying?” they enquired of the milling mass.
The room we are already familiar with was pointed out to them, and the visitors set out for it. One of them – a young man, about twenty-five years old, shortish, round-faced, with a sparse beard and moustache – was the son of Ziya-shakhichi, a very well-to-do man from Margilan. He went by the name Rakhmat. The second was about thirty-five years old, lanky, his dark face disfigured by pockmarks. With his flinty eyes and dishevelled beard, he made a most unpleasant impression. Although affluent enough, this man was renowned not for his wealth but for his nickname ‘Hamid-the-Womaniser.’ So popular was this epithet that it had, in fact, become an intrinsic part of his name; should someone refer to him merely as Hamid, others failed to realise who was being referred to. Hamid-the-Womaniser was not acquainted with Atabek, but he was a close relative of Rakhmat, being the latter’s uncle, and Ziya-shakhichi’s brother-in-law.
They both entered the lodgings. Atabek greeted them respectfully, as is proper.
“Forgive us, bek-aka,” (Bek – ruler and leader; in this case, it is used as a polite and respectful form of address, akin to ‘lord.’ Aka – lit. ‘uncle,’ commonly used as a term of respect when addressing one’s elders. (Translator’s note.)) Rakhmat began, “For disturbing you with a visit at this untimely hour.”
Ushering the guests to be seated in the place of honour, Atabek replied with disarming kindness:
“Why no, not at all! You are not disturbing me, far from it! You have greatly gladdened me, since I am visiting your city for the first time and, knowing no-one here, I am quite weary of this enforced seclusion and tedium.”
Meanwhile, a third man entered the room. He, too, bade them welcome. Khasanali, as the old man was called, was around sixty years old, with an oblong face, prominent forehead, round, almost yellow eyes, and a long, snow-white beard. Beard aside, his posture and complexion belied his age.
Atabek seated his guests at the sandal (Sandal – a small, low table over an iron box with hot coals recessed in the floor which serves to warm the feet and legs in winter. (Translator’s note.)) and, after a short prayer, turned to Khasanali:
“How are you feeling, Father?”
“Allah be praised,” replied Khasanali, “It has eased somewhat. I must have inhaled fumes from the coals.”
“Would you do something for me…?”
“State your wish, my son.”
“I would be most grateful if you would boil us some tea.”
“It shall be done, my bek.”
Khasanali left. After enquiring after Atabek’s health once more, Rakhmat asked:
“Bek-aka, how is this person connected to you?”
Atabek fell silent for a while, then glanced at the door. Only when he was satisfied the old man was out of earshot did he reply.
“He is our slave.”
Something about these words startled Hamid.
“Your slave?”
“Precisely.”
When Khasanali was but a boy, Atabek’s grandfather had bought him for fifteen gold tilla (Tilla – a gold coin (Translator’s note.)) from a Turkmen who traded children, kidnapping them in Iran to sell elsewhere. The slave Khasanali had lived with Atabek’s family for almost fifty years now, during which time he had become a true family member. He was eternally devoted to his owner, Yusufbek-hadji, and even more so to his son, Atabek, who treated him with trust and respect. When Khasanali turned thirty, they married him to a bought slave-woman, although the marriage had remained childless, since any babies born died soon after. And so the old man directed all his love and attachment towards Atabek, whom he cherished as his own. “Should he read the prayer from the Koran after my death and remember me with kind words – there once lived a man named Khasanali-ata (Ata – a term of respect, literally ‘father.’ (Translator’s note.)) – then this is more than enough for me,” he thought to himself. Indeed, he had already raised this matter with Atabek and received the latter’s honest assurance that prayers would be said for him. Such was our slave, this simple-hearted old man.