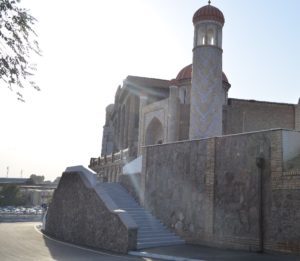 The Hazrat Khizr Mosque, one of the most venerated spiritual sites of Samarkand, is located on a hill which gives a mesmerizingly gorgeous panoramic view of the legendary city and its architectural jewels – the Bibi Khanum Mosque and the blue domes and patterned minarets of the Registan Square.

Built in the 8th century on the orders of Khorasan governor Qutayba ibn Muslim, it was the first mosque constructed in Samarkand following the Arab conquest of the region. In the past the mosque was located in the vicinity of the city gates, through which caravans following the Great Silk Road entered the city.

According to legend, Qutayba was instructed to build a mosque on this site by one of the most revered mystical figures in Islam, Hazrat Khizr.

It is believed that Hazrat Khizr lived at the time after the biblical Prophet Abraham. In various Islamic traditions, Khizr is described as a prophet or a saint. He is believed by many scholars to be a figure who was described in the Quranic Surah Al-Kahf (verses 60-82) as a righteous servant of God possessing great wisdom and mystic knowledge, and who accompanied Moses as his spiritual guide. In the story narrated in Islam’s holy scripture, the Prophet Musa (Moses) meets a wise, knowledgeable man, referred to in the Quran as “one of Our servants unto whom We had given mercy from Us, and We had taught him knowledge proceeding from Us”. Khizr acts as Moses’s mentor and teaches him the value of patience in seeking answers to occurrences that defy comprehension.

There are many legends and stories about Hazrat Khizr. There is a widespread belief among Muslims that Khizr was granted immortal life, but claims of his continuous existence are often refuted by leading Islamic theologians.

In particular, one of the most revered theological scholars in the Islamic world, Sheikh Muhammad Sodiq Muhammad Yusuf (May God bless his soul) wrote that there was no evidence to support claims of Hazrat Khizr’s immortality, and such assertions clearly contradict the Quranic verse which says, “And We granted not to any human being immortality before you (O Muhammad); then if you die, would they live forever?”. (al-Anbiya’ 21:34).

The Sheikh also says he is of the opinion that Khizr was the Messenger of God, rather than a saint.

It is believed that one of Hazrat Khizr’s special qualities was his ability to make vegetation grow even in a desert, hence his name “Khizr”, which means the verdant one.

There is also a legend saying that Khizr died, but God granted his soul the ability to appear in human form to help righteous people. According to another legend, every human being encounters Khizr, who appears in different guises, three times in the course of his or her lifetime. Blessed is the person who does not hurt his feelings during these encounters. Lucky is the person who meets Khizr and recognizes him, as not everyone is destined to have this privilege.

At the beginning of the 13th century, the Hazrat Khizr Mosque was destroyed during the Mongol invasion of our region. It was rebuilt in 1854 on its ancient foundations by Samarkand artisans on orders from the Bukhara emir Muzaffarkhon. The mosque’s terrace and entrance gates were built in 1899.

The Hazrat Khizr mosque is listed by UNESCO as a World Heritage Site.

During the years of independence, conservation work has been undertaken to preserve this historic site.

On 3 September 2016, the First President of Uzbekistan, Islam Karimov, was buried near the Hazrat Khizr Mosque.