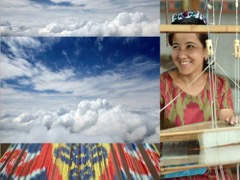 “Abr” means a cloud, the patterns which are inspired by clouds. In the East every craft tradition – which is passed down exclusively from generation to generation, from father to son, from grandmother to granddaughter – turns into a subject of mysterious and captivating legends, bringing beauty and harmony into the world.

According to historical records, silk originated in China, where its production began in the 2nd millennium BC. Thanks to the trade routes from China, in 2-3 centuries AD the first samples of Chinese silk appeared on the territory of present-day Uzbekistan, where the production of silk fabrics started in the 6-7 centuries. This period was marked by the flourishing of the caravan trade on the Silk Road, with Samarkand, Bukhara and Fergana being among its key centres. Silk was one of the most prized commodities of this trade route, which served as a bridge between the Eastern and Western civilizations. Shreds of fabrics produced in seventh-century silk-weaving workshops were discovered during the excavations of settlements on the territories of Uzbekistan, the Caucasus and Western Europe.

According to written sources, in the 9th – 16th centuries, various kinds of richly ornamented silk, semi-silk and cotton fabrics were produced on the territory of Mawarannahr (Transoxiana) – namely in the cities of Samarkand and Bukhara. Many of these fabrics were exported to the countries of the Middle and Near East.The main centers of the Uzbek silk-weaving tradition emerged in the late 18th and early 19th centuries in the cities of Bukhara, Namangan, Margilan, Samarkand, Shakhrisabz, Kitab, Karshi and Khiva, where silk fabrics, now called “ikat” in the West, were produced. The term “ikat” originates from the Indonesian word which means “cord, thread, knot”.

In Uzbekistan, these fabrics are called “abr silk”. Abr is Persian for cloud. Artisans explain that the fabric derives its name from patterns which resemble floating clouds. There is also a legend about the origin of the term. As the story goes, a weaver, who was sitting beside the stream, saw a reflection of clouds floating in the water and began to create drawings on fabric, which was subsequently named “abr”, patterns inspired by clouds. According to another version of the legend, the weaver spilled oil used for lamps in the pond and saw curious outlines of patterns in colorful circles. 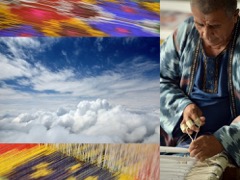 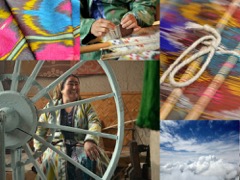