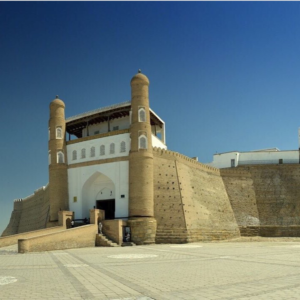 The Ark fortress is the oldest architectural monument of Bukhara. It stands on a hill which is 20 meters higher than the surrounding area. The area of the fortress is 4.2 hectares. The Ark was planned as a closed polygonal structure. Throughout its history, the fortress was repeatedly destroyed and rebuilt. The first reference to the Ark is made in the “History of Bukhara” by Abubakr Narshakhi (899-960). Narshakhi wrote: “The Bukhara ruler Bidun Bukhar Khudot built this fortress, but it soon collapsed. However hard he tried to build, it went on collapsing.” Then, the ruler sought the counsel of his wise men, who advised him to build the fortress on seven pillars arranged in relation to one another as the stars of the constellation Ursa Major. Only when the pillars were built in this order, did the walls of the fortress stop collapsing. Though the exact years in which the Ark was built are not known, according to historical records, one-and-a-half thousand years ago it already served as the residence of local rulers and the city’s inhabitants.

The Ark of Bukhara was listed by UNESCO as one of the World Heritage Sites.