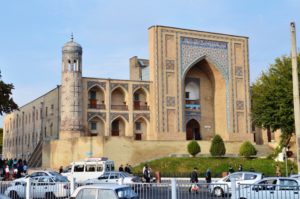 Tashkent, a city whose history dates back over 20 centuries, is home to some of the most splendid architectural masterpieces of Uzbekistan’s cultural heritage.

Located in the historical centre of the city, the Kukeldash madrasah is one of the most distinctive historical landmarks of the Uzbek capital. Built in the 16th century, the madrasah sits on a hill overlooking the famous Chorsu bazaar, which in the past was located at the crossroads of trade caravans following the Great Silk Road.

Kukeldash has for several centuries been one of the largest theological schools in Central Asia. It was built in 1591 as a part of the city’s central complex, the Registan, and its construction was funded by Kulbobo, a prominent statesman who held influential posts under rulers of the Sheybanid dynasty. The word “kukeldash” literally means “foster brother to the khan”, and according to historical accounts, Kulbobo was not only an influential official, but also a prominent scholar and poet in the khan’s court.

The Kukeldash madrasah is built of yellow brick, and its towering archway is decorated with remarkable mosaics and majolica. The walls around its inner yard contain khujras – student dormitories – a small mosque and a lecture hall.

For many years this location served as the centre of the city’s life. In the 18th century the madrasah was converted into caravansarai, a roadside inn where travellers could rest and recover from a day’s journey. In the 19th century it served as a fortress for rulers of the Kokand khanate.

In the 1830s the madrasah’s blue domes, lecture hall and the second floor of the student dormitories were broken up into bricks for other buildings. They were subsequently restored by Tashkent artisans.

In the 20th century the madrasah’s building housed a museum, first of atheism, and later of folk music. In the 1990s it was reconstructed on the basis of pictures of the 1880s. In 1999 it resumed its activities as a theological school.