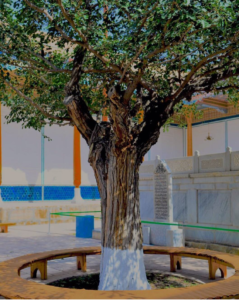 The Naqshbandiya is one of the most widespread and influential Sufi orders in the Muslim world. It traces its spiritual lineage to Prophet Muhammad (May peace be upon him) through Abu Bakr Siddiq and Ali ibn Abu Talib, the Prophet’s closest companions and advisers.

While Sufi scholars before Naqshbandi mainly focused their teachings on contemplative life, one of the main principles of the Naqshbandiya order is “Give your hands to work, and your soul to God”.

The distinguished feature of the Naqshbandiya among other tariqas (Sufi orders) is the silent dhikr (ritual prayer practiced by Sufi mystics to glorify God and achieve spiritual perfection). According to Naqshbandiya teachings, the silent dhikr produces in the heart an intense and imperishable impression (naqsh – “impression, print”; band – “to bind, to fasten”).

Sufism is a mystical tradition in Islam which has its roots in the Quran and religious experience of the Prophet Muhammad. According to Sufism, the Prophet is at the origin of the chain of spiritual descent of every Sufi order.

Sufis base their spiritual quest to find the truth of divine love and knowledge on the Quranic verse which says: “We [God] are closer to him [humanity] than his jugular vein.”
The great Sufi masters wrote constantly of love, mercy and compassion as essential to the spiritual path of every person who considers him/herself a Muslim. The Quran says that God sent the Prophet Muhammad first and foremost as a Mercy for all peoples.

Islam is a religion that supports peace, human freedom, tolerance, charity, mercy, education, science, the development of human thought, and peaceful coexistence between representatives of different nations and faiths.

The Quran says: “O mankind! We created you from a single (pair) of a male and a female, and made you into nations and tribes, that ye may know each other (not that ye may despise each other).” (49:13)

Another verse says: “Had God willed He could have made you one community. But that He may try you by that which He hath given you (He hath made you as ye are). So vie one with another in good works. ” (5:48)

Mercy and Compassion are the most frequently mentioned words in the Quran. Each of the Quran’s surahs (chapters), except Sura 9, begin with the invocation “In the name of God, the Merciful, the Compassionate”, and indeed one of the most fundamental principles of Islam is that every human being should practice the primary obligations of mercy and compassion.