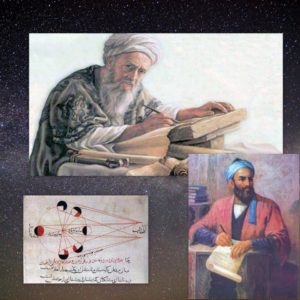 Abu al-Rayhan al-Beruni (973-1048) – great Muslim astronomer, mathematician, ethnographist, anthropologist, historian and geographer. He was born in Kath (present-day Uzbekistan), and is believed to be the first person to suggest that a landmass existed beyond Europe and Asia. Beruni measured the earth’s circumference with incredible accuracy, erring from the exact value of 24,900 miles by a mere 200 miles, a remarkable achievement for someone who lived 1000 years ago. Many centuries before the rest of the world, al-Beruni discussed the possibility whether the Earth revolved around the Sun.

In his works Al-Beruni gave a detailed account of his observations of solar and lunar eclipses; he figured out a remarkable and ingenious method to calculate the radius of the earth. His Masudic canon contains a table giving the coordinates of six hundred places. Beruni described the properties of numerous stones and metals from the natural, commercial, and medical points of view.

His fluency in multiple languages – including Arabic, Persian, Greek, Latin, Turkic, Hebrew, Sanskrit and Hindi – helped him to develop the principles of the translation of scientific terminology.

Along with his contemporary Avicenna, Beruni is considered to be one of the greatest Islamic scholars.