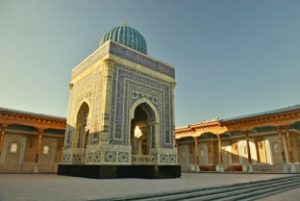 Abu Abd Allah Muhammad ibn Ismail al-Bukhari – one of the greatest Islamic scholars and compilers of hadiths, the recorded corpus of the words, actions or habits of the Prophet Muhammad. Al-Bukhari’s collection of hadiths is recognized to be the most authentic collection of reports of the Sunnah (normative legacy) of the Prophet Muhammad, may God’s peace and blessings be upon him.

Al-Bukhari was born on the 13thof the Islamic month of Shawwal 194 AH (19 July 810) in the city of Bukhara (present-day Uzbekistan). His father died while he was still an infant, leaving his upbringing to his mother. According to some sources, al-Bukhari became blind at a young age. His mother saw in her dream the Prophet Ibrahim (PBUH), who told her “God has restored the sight of your son because of your intense and beautiful invocations”.

From a young age, al-Bukhari had an exceptional memory and showed a unique ability to understand major theologicial issues. He memorised many of the Prophet’s sayings as well as their long and complex chains of transmission, which are important in connecting any particular saying to the Prophet Muhammad (PBUH).

Al-Bukhari memorized the entire Quran at the age of nine.

Once asked how he started studying hadiths, al-Bukhari responded: “I was bestowed the talent of memorising hadiths while I just started my studies. I was 10 years old or less at the time. After that I started acquiring knowledge from various teachers. When I reached 16, I already knew by heart the books of Abdullah ibn al-Mubarak and al-Waki.”

He acquired immense knowledge and visited all the main centres of learning in the Muslim world. He said that he wrote down and accepted hadiths from 1,800 master scholars.

Unlike many of his contemporaries, al-Bukhari believed that Islamic jurisprudence should dispense with less worthy narrations whose chains of transmission did not meet the authenticity requirements. He was the first scholar to produce the collection of reliable hadiths which met the most rigorous standards of authenticity. It is reported that al-Bukhari devoted sixteen years to sifting the hadiths he included in his Sahih collection. From a pool of approximately 600,000 narrations al-Bukhari gathered, he selected only about 7,275 that he considered completely reliable and thus meriting inclusion in al-Jami al-Sahih. It is regarded as the most authentic collection of hadiths.

Al-Bukhari remains one of the most venerated figures in the Islamic world.

Al-Bukhari died in 870 and was buried in the vicinity of Samarkand. His 1225th anniversary (under the lunar calendar) was marked under the aegis of UNESCO.